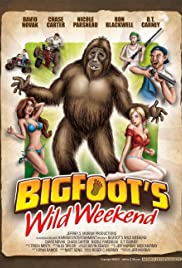 A tabloid reporter makes a shocking cryptozoological discovery while investigating a recent rash of Bigfoot sightings in this comedy featuring beer, bikinis, and the wildest party animal you’ve ever met. Harlan James (Chase Carter) doesn’t believe in Bigfoot. He’s determined to disprove his existence when he heads into the woods, and starts to interview witnesses. Much to Harlan’s surprise, he finds that Bigfoot is no forest-dwelling menace, but a mischievous Sasquatch with a taste for beer, and a love of beautiful women. Unfortunately for the fun-loving creature, vengeful redneck Chester Scroggins (Ron Blackwell) and some villainous bounty hunters are more interested in capturing Bigfoot than sharing a brew with him. Now, with the clock ticking, Harlan enlists the aid of the local sheriff (David Novak) and a pretty television reporter (Nicole Parsneau) in getting the story of a lifetime, and protecting the beast who only wants to party.